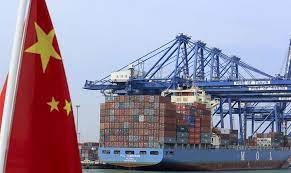 EIJING — Data show that Taiwan is more dependent on China Trade than the United States for trade, even as U.S. House Speaker Nancy Pelosi supported Taiwan in a high-level visit this week.

Taiwan came under military and economic pressure from Beijing this week after the democratically self-governing island allowed a visit by Pelosi, the highest-ranking US official to set foot on Taiwan in 25 years.

The visit came despite warnings from China, which considers Taiwan part of its territory and maintains that the island should not have the right to engage in foreign relations. The US recognizes Beijing as the sole legitimate government of China, while maintaining unofficial relations with Taiwan.

Still, Taiwan’s trade and economic ties with mainland China and Hong Kong have grown to such an extent that the region is by far the island’s largest trading partner.

Last year, mainland China and Hong Kong accounted for 42 percent of Taiwan’s exports, while the United States accounted for 15 percent, according to official Taiwan data obtained by Wind Information.

In total, Taiwan exported $188.91 billion worth of goods to mainland China and Hong Kong in 2021. According to Taiwan’s Ministry of Finance, more than half were electronic components, followed by optical equipment.

As the source of Taiwan’s imports, mainland China and Hong Kong again ranked first with a 22 percent share. The US had only a 10 percent share, behind Japan, Europe and Southeast Asia.

Trade With Mainland China Is Increasing

In recent years, Taiwan has purchased an increasing amount of goods from mainland China Trade and vice versa.

Between 2016 and 2021, Taiwan’s exports to mainland China increased by 71 percent. But exports to the U.S. nearly doubled, up 97 percent.

According to US government data, major US purchases of Taiwanese goods include electrical machinery, vehicles, plastics, and iron and steel products.

Many Taiwan-based companies, such as Apple supplier Foxconn, operate factories in mainland China.

According to the US Congressional Research Service, in 2021, Taiwanese companies received $200.1 billion worth of export orders from the US.

According to the 2020 census, about 157,900 Taiwanese live in mainland China Trade, a decrease of about 7 percent from the previous decade.

The entire island of Taiwan was home to about 23.6 million people in 2020, slightly less than Shanghai’s population of about 25 million at the time.

However, Taiwan’s economy is larger than Shanghai’s, with about $781.58 billion, compared to $680.31 billion last year, according to official data.